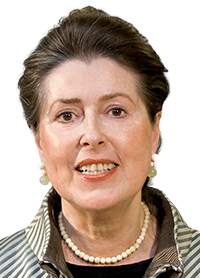 The GPUS, formerly the German-Polish Society for Eastern Europe, is an international non-profit organization founded in 1995 and is based in Berlin, Germany. The Society supports, the democratic and economic transformation taking place in the countries of Eastern Europe.

She is also the Initiator, Founder and President of The BELA Foundation. The BELA Foundation, an international non-profit organization founded in 2006, is based in Berlin, Germany. BELA stands for Broader European Leadership Agenda. The objective of the Foundation is to broaden understanding and enhance interaction between the future generations of European leaders.

For more than twenty years Barbara-Maria Monheim has been contributing to the improvement of the relationship and reconciliation process between Poles and Germans. Anticipating the state of emergency, she left Poland in the fall of 1981 for Germany. In 1985 she started her first charitable activities. In 1989 she became a founding member and vice chairman of the Society for German- Polish Further Education in Management.

She subsequently supported for 10 years the Industrial Development Agency in Warsaw by organizing seminars and the exchange of experts between the agency and international counterpart institutions e.g. the German Treuhandanstalt. From 1998-2002 she served on a voluntary basis as adviser on international affairs to the President of the agency.

From 1997 – 98, during the flooding of the Oder/Neise area she organized a relief program for the Opole region. For this she was awarded the Order of the Cavalier’s Cross “Polonia Restituta” by the President of Poland and also a medal in honor of her services to the Opole region.

Barbara-Maria Monheim is currently contributing to the development of civil society in Ukraine by creating a center to accommodate children in need in Kiev. This socio-political project has been accorded the status of a model by the Ukrainian government. This is unprecedented and should, after a further evaluation in 2011, lead to the introduction of EU legal standards with regard to childcare in Ukraine.

Barbara-Maria Monheim is of Polish origin. She holds a M.A. degree in Economics from the Warsaw School of Economics. In 2009 she was awarded the Bundesverdienstkreuz of the Federal Republic of Germany.